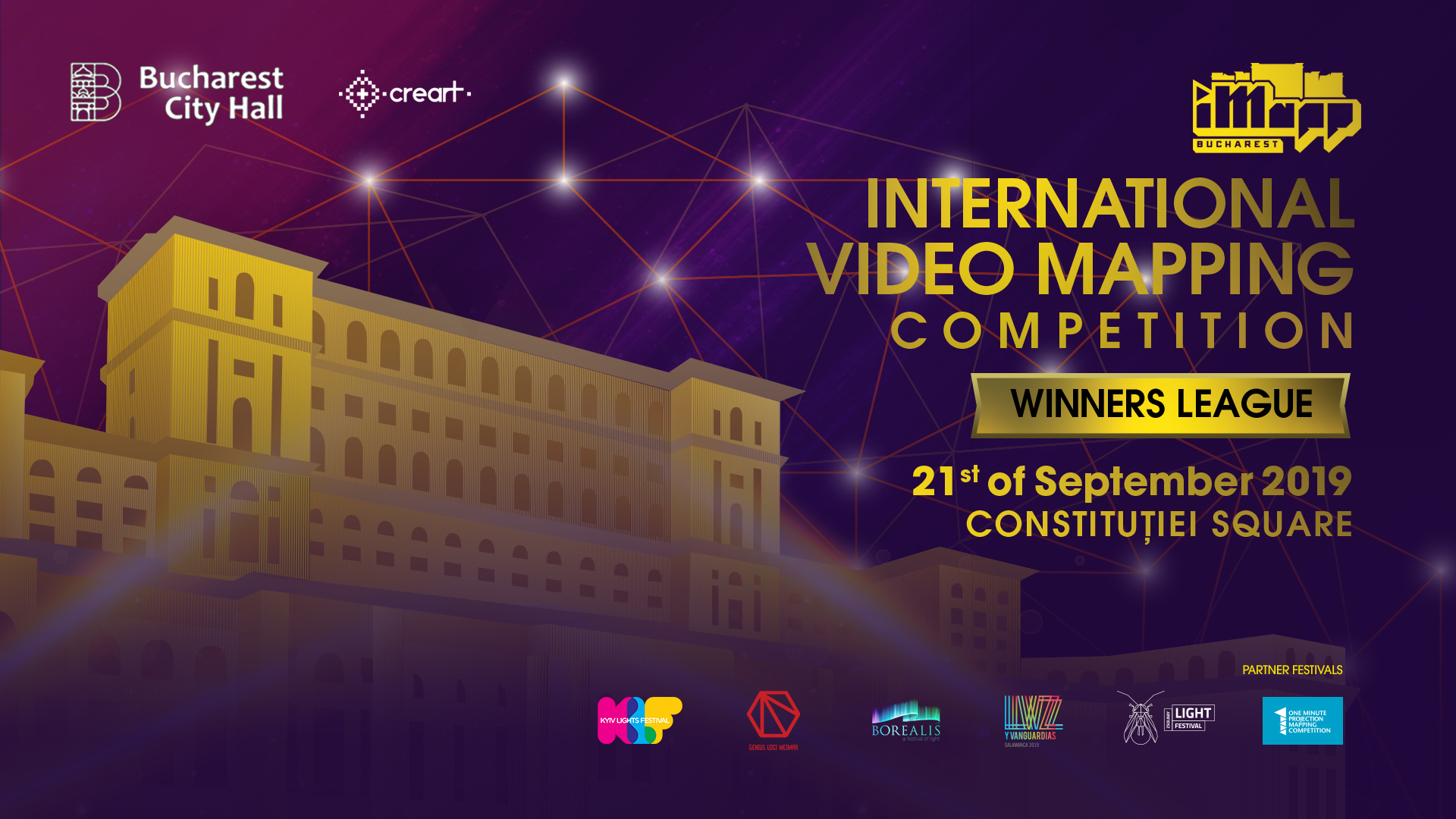 Celebrating 560 years since the first documentary attestation of Bucharest, Bucharest City Hall, through creart, organizes on 21st of September 2019, in Constitutiei Square, Bucharest, Romania, the 6th edition of iMapp Bucharest, one of the biggest 3D video mapping international contests.

The theme of this year’s edition of iMapp Bucharest marks the fact that the competition becomes the Winners League of the Video Mapping World, connecting by this some of the most important festivals, artists and specialists worldwide, making at the same time a reference to the 30th Anniversary of the World Wide Web (WWW) and the limitless possibilities – including the borderless cooperation and communication – it brought into our life.

The façade of the Palace of Parliament in Bucharest will become on 21st of September 2019 the map of the video mapping world, each finalist team revealing its own way of exploring the world and the international video mapping scene. Each video artwork should present the way we discover the same world through different experiences, based on our different cultures and perceptions. The map of the Globe stays the same, but it is enriched by the million ways we see and experience each continent, region, land, city, corner, scenery, route or path of the world.

Moreover, in 2019 the whole world celebrates 30 years of the World Wide Web (WWW). And since this vision of universal connectivity made the borderless communication possible, as well as travelling and exploring different cultures and regions in online and offline, the first edition of iMapp Bucharest as the International Video Mapping Competition – Winners League will also make a reference to this significant moment of our common history, that literally changed the world.

On the 21st of September 2019, the 8 finalist teams will be juried by a professional panel of international judges, who are all distinguished experts and prominent representatives of international visual culture (from the field of arts, visual communications, media, film etc.) and who represent the partner festivals. The jury component will be announced on the website (www.imapp.ro) the latest on 1st of September 2019.

Furthermore, the public will have the possibility to choose also this year a favourite team via SMS, the competition maintaining also in this new format its essential interactive component.

Alessio Cassaro, the Chief Executive Officer of Antaless Visual Design Studio, has been working in the graphical animation field for more than 10 years, specializing himself for some years in the field of video mapping. This specialization began as a hobby, for fun rather than work, but he fell in love with it and decided to make it his profession. He has created the backdrops for many shows and concerts. ”After finishing education, I worked in multiple theatres as an audio-video-lighting technician. After this, I worked for several video mapping companies that are known worldwide. In 2013, I founded Antaless Visual Design with the purpose of sharing my emotions to the visual art world. I have taken part in various international competitions and won some prestigious prizes. As of now, I am incessantly pursuing my career and I hope to improve and progress in this fantastic field.”

George Berlin Studios is an award-winning team of truly unique aesthetic and standout style. As chief creative genius of the studio, George Berlin leads his colleagues, igniting a world of whimsy, for the joy of creating and sharing it. George Berlin Studios conjures up artfully crafted audience experiences, which charm, endear and delight. The studio combines light, color, imagery and sound into 3D animated tapestries that seem to bring architectural canvases to life, delighting crowds with a wondrous spectacle.

404.Zero conjures a precise and clearly definite understanding of life’s concept. The art project was born in an attempt to establish a definition of the evisceration of conventional dogmas and values. In 2016, two artists joined together to create projects that could push the meaning of clarity to the limits in terms of modern generative art. The 404.Zero team have participated in festivals and exhibitions in Russia, Germany, Indonesia, USA, South Korea, Japan.

MØJØ STUDIO is a creative duo based in Lisbon, Portugal. ”We create audiovisual experiences with enhanced technology, art and design. A mixture of daydreaming with architecture, time travel, temporal dissociation and disruptive madness, a journey through recondite places of the collective mind.”

Marco Morgese is working in the field of visual art since 2007. He began his artistic career as a VJ in clubs, raves, events. Since 2011, with the acquired skills, he has decided to devote himself to video mapping and the creation of multimedia contents. He is inspired by practically everything his eyes can see and his imagination conceives. He graduated in 2019 in New Art Technologies.

Michele Pusceddu is a visual artist, programmer and performer born in Cagliari (Italy). He graduated at the Cagliari Conservatory in 2014 in ”Music and New Technologies”. Michele is specialized in 3D motion graphics, 3D graphics in real time & video mapping. He has collaborated with various companies specialized in this sector, theater companies, video production & live performances. He began to approach visual art in 2011 and since 2016 he started to participate in video mapping festivals. He obtained several important prizes, such as: 3rd place at GlowFestival Mapping at Ostuni (Italy), 2nd prize at the Pescara Mapping, 2nd place at the Festival of Lights in Berlin. In mid-2017, he entered the Antaless Visual Design team and together with Alessio Cassaro he won several other important prizes, such as: 2nd place at the Artvision Contest 2017 in Moscow, 1st prize at ”1minute projection mapping competition” in Japan. In mid-2018 he left the team and successfully continues his career, participating and being awarded at important video mapping festivals worldwide.

René Te Riele and Andrzej Krawczyk are motion designers from Netherlands and Poland. „As a team we are experienced in projection mapping and won several projection mapping prizes. We focus on conceptual strong ideas that are visually appealing.” In 2018, the two video mapping artists won the iMapp competition – Jury Award – for the Vision Impossible studio from Amsterdam. This year, they decided to enter the competition on their own name.

Mindscape Studio is a multimedia and creative technology studio specialized in video mapping, event design and interactive installations. The work they have done has received awards at international festivals and events, such as: Public Choice Award at iMapp Bucharest 2018, 1st Place at Spotlight Festival 2018, Best Experimental Mapping and Best VJ Award at Visual Artist Awards 2018, Public Choice Award at iMapp Bucharest 2015 (as a joint venture with the MotionLab Studio in Bucharest). The people behind Mindscape Studio always try to push the limits and accomplish the impossible. Their art directors, motion designers and technology specialists will always find a way to make everybody’s dreams come true. And all of this is in the name of love they have for image, colour, vibration and, most of all, new technology.

Given the evolution of the video mapping contest in a worldwide Winners League,  the 8 teams presented above, winners of international video mapping festivals, are the only finalists of iMapp Bucharest 2019, there will be no open calls, taking into consideration the new status of the event – The International Video Mapping Competition – Winners League.

The finalist teams will create 4 minute long 3D video mapping animations and will try to amaze with their video art works, projected on the façade of the Palace of Parliament on 21st of September 2019.

Strictly Necessary Cookie should be enabled at all times so that we can save your preferences for cookie settings.

If you disable this cookie, we will not be able to save your preferences. This means that every time you visit this website you will need to enable or disable cookies again.

Please enable Strictly Necessary Cookies first so that we can save your preferences!