Exhibition “Architecture and Royality” at the Athenaeum in Iasi 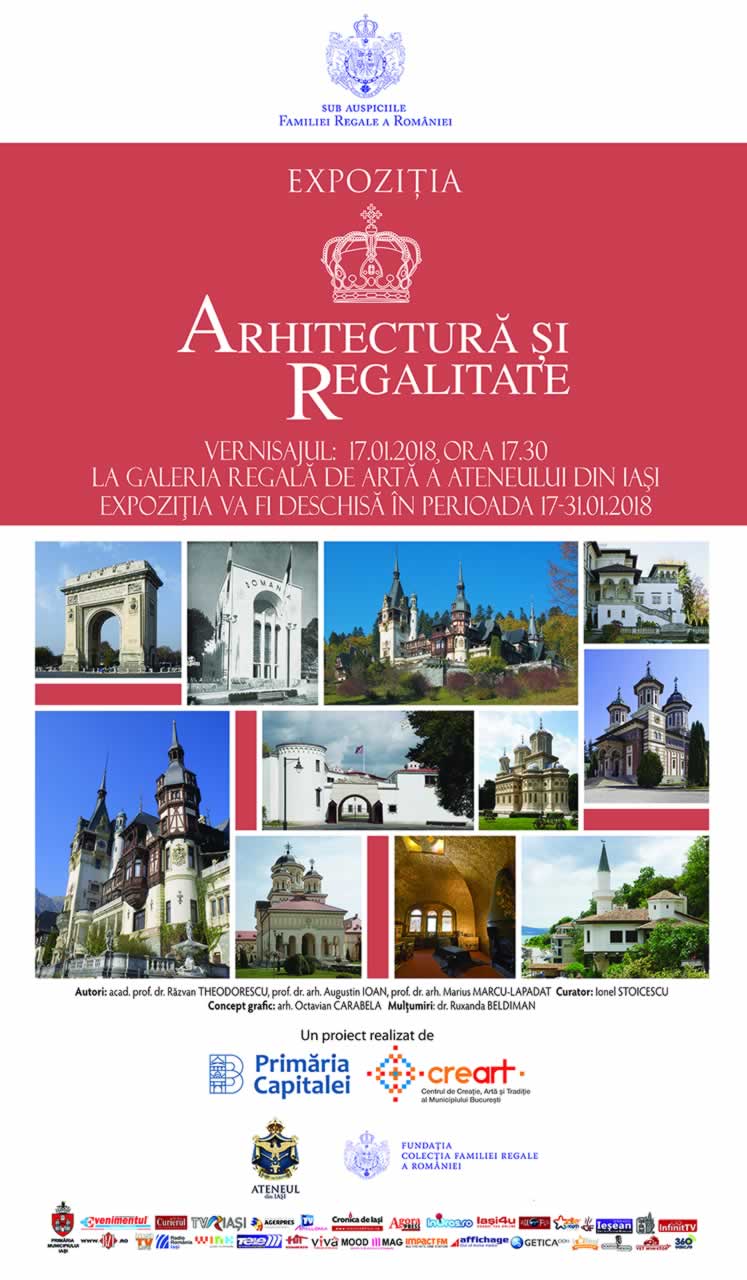 The Capital City Hall through the Creator – The Center for Creativity, Art and Tradition of Bucharest, in partnership with the Athenaeum in Iasi, organizes the exhibition “Architecture and Regality” from 17th to 31st January 2018 at the Royal Art Gallery of the Athenaeum in Iasi. The opening will take place on January 17, 2018, from 17:30.

The exhibition, which takes place under the auspices of the Royal Family of Romania, bears the signature of the acad. Prof. Dr. Răzvan Theodorescu, Prof. Dr. Augustin Ioan and Prof. Dr. Marius Marcu – Lapadat, Curator – Ionel Stoicescu, and illustrating three major themes: “The Architecture of the Kings and Queens of Romania”, a section that remarks the role direct of the kings and queens of Romania in the realization of some of the most important edifices of the country; “Representative Architecture in Romania Influenced by Royality and Monarchs”, theme dedicated to the influence of kingdom in society, in the configuration of some directions in architecture in Romania; “The exhibition of royal exhibitions”, a section illustrating the architecture as it was designed to society and abroad, an architecture about how the Kingdom of Romania wanted to be seen outwardly.

The exhibition “Architecture and Royality” was first presented to the public in May 2016 at the Pelişor Castle in Sinaia on the occasion of the Royal Day, dedicated to the 150th anniversary of the arrival of Carol I in Romania and the foundation of the Royal Dynasty , as well as the 135th anniversary of the proclamation of the Kingdom of Romania. The opening was carried out in the presence of A.S.R. Princess Elena of Romania and E.S. Mr. Alexander Nixon. The exhibition was then traveled to Berlin, at the Embassy of Romania, at the invitation of E.S. Mr. Emil Hurezeanu, Ambassador of Romania to Germany. The Creart Gallery, the ICR headquarters in Vienna and the 18th edition of the “Etnovember” Festival in Brasov followed. In 2017, the exhibition was presented at the University of Architecture in Venice, in the Palace of the Princely Palace in Oradea Fortress, at the ICR London headquarters, at the University of Washington in Seattlte, USA, at the Romanian Architects’ Union, at Pallazo Gravina – Architect of Frederico II Unversity in Naples, the Art Museum in Craiova, and the Polytechnic School of Architecture and Urbanism in Algiers.